One word: MAKEUP.  Now, before you go and throw away all of your eye shadows and highlighters and concealers, hear me out.  And before I get emails and lawsuits from makeup companies for defamation, hear me out.  It’s NOT the makeup itself, nor am I against wearing makeup (yes, I wear it, too and enjoy it) – it’s more about WHAT the makeup tries to hide that is the culprit.  Millions of women buy make up every day to help them cover something up, help them accentuate something, help them elongate something and because of that, they become hypersensitive and hyperaware of the things that are “wrong” with their faces when they are without makeup. 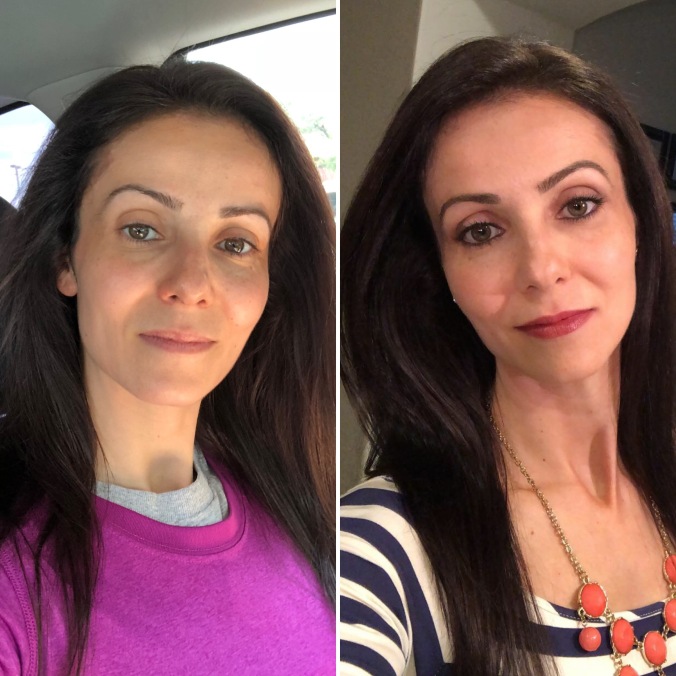 Makeup has its place, believe me.  It can help dress up an outfit, it can help make a woman feel more confident, it can even help to cover acne or facial scars.  But at the same time, it causes women to “AGE” because instead of embracing the natural changes of one’s face with the test of time, women are often taught that to age is unbecoming, or not as beautiful as a young, flawless and youthful appearing face.  Women are often too afraid to go fresh-faced because they do not want others to see their dark circles or their tired eyes or their “oversized” noses or their unkept eyebrows (see the image above on the left without makeup…tired eyes, nonexistent eyelashes, extremely untamed eyebrows). Therefore, when women are photographed WITHOUT make-up on, they often LOOK OLDER than if they had makeup on in the first place (check out any female celebrity whose picture is often taken with and without makeup and the onslaught of negative comments she gets for appearing older and not as attractive WITHOUT her makeup on).  It’s a double-edged sword, and it typically only affects women.  Men for the most part do not wear make-up so when photos are taken of them in their natural state there are no majorly glaring differences seen from one “made-up” photo to one without the added affects of makeup.  This is where I believe women tend to “age” faster than men.

If we are used to seeing a man at the age of 20 without makeup and then again at the age of 40 (once again without makeup), we do not notice the “tired” eyes or the dark circles or the oversized nose because those things were never hidden (or made to appear differently) from when they were 20.  Now, for that same 20 year old woman who is constantly wearing makeup and constantly highlighting and concealing and elongating and defining, when she has her picture taken at 40 (or even while she is still 20) without those same effects of the makeup, she often APPEARS older.  And not only does she personally pick apart her fresh-faced image, so do others, and often time, so does society. It ends up being a difficult and often painful cycle that women go through and so they continue to wear the make-up and continue to overly analyze their need for a more youthful appearance.  It also doesn’t help that all marketing around fine lines, laugh lines, wrinkles and everything else is most often targeted at WOMEN only.  It’s as though aging for a female is detrimental to her existence while men do not bear the same cross.  They become more classic, more revered as they age while women are not afforded the same praise.

WE are all beautiful in our natural states; however, as women, we must learn to embrace our fresh faces WITHOUT constantly trying to change our appearances with makeup.  We must learn to embrace our looks rather than comparing ourselves to models or celebrities or magazine pictures of “perfection.”  Makeup has a place and I’m not saying it should be removed from our daily routines, all I’m saying is let’s learn to embrace our NATURAL facial features so that as we do age (which unfortunately is the natural order of things), we do it gracefully and without remorse.